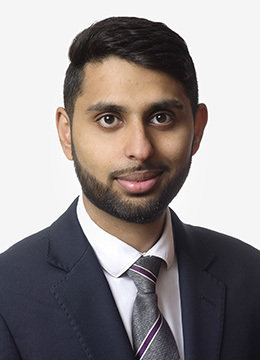 Vakas joined Chambers in April 2018 following the successful completion of his pupillage, under the supervision of Gareth Hughes, Terence Woods and Sasha Bailey.

Vakas regularly appears in the Crown Court, Magistrates’ Court and Youth Court. He has also appeared in the Court of Appeal where he successfully appealed a sentence where the defendant was not given a sufficient reduction in his sentence for a guilty plea. He has defended in a broad range of cases which have included, ABH, s.20 GHB, robbery, sexual assault, drug offences, theft and public order.

Vakas has a very good grasp of identifying what the key issues in a case are, and how best to tackle them. He has been described as a “fine advocate” who “invests himself deeply in the plight of his clients.” Vakas is highly relatable to those who he defends as he has an “unpretentious style of communicating,” which serves him well when dealing with vulnerable clients, who present with significant mental health and substance misuse issues.

Prior to starting pupillage Vakas undertook various internships and paralegal roles. He interned at the Capital Post-Conviction Project of Louisiana in New Orleans, where he worked with other Attorneys representing individuals who had been sentenced to death with the appeals. He also co-chaired the ‘Rotherham 12 Defence Campaign’ where all 12 Asian men were acquitted of violent disorder at Sheffield Crown Court. The men were charged after they were attacked by members of a far-right racist group following a protest in the town center.

Vakas regularly appears in the Crown Court, Magistrates’ Court and Youth Court. He has also successfully appeared in the Court of Appeal. He has defended in a broad range of cases which have included, ABH, s.20 GHB, robbery, sexual assault, drug offences, trading standards, theft, public order and driving offences.

Vakas also has experience of dealing with civil proceedings arising out of the Proceeds of Crime Act 2002, and regulatory proceedings.

Luton Borough Council v NUR (Luton Crown Court)  – Defendant pleaded guilty to fraudulent trading under s.993 of the Companies Act 2006 following which Confiscation proceedings were commenced. Initially, the prosecution arrived at a ‘benefit figure’ in excess of £600,000. However, in the end the benefit figure was negotiated down to £86,062.60 and a Confiscation Order was made in the sum of £2,244.20.

CH v The Commissioner of the Metropolitan Police Service (Guildford Magistrates’ Court) – Represented the Applicant in civil proceedings brought under s.1 of the Police (Property) Act 1897. The Applicant was successful in having his high-end motor vehicle returned to him by the police which had been seized under the Police and Criminal Evidence Act 1984.

Kent Police v IK & Others (Maidstone Magistrates’ Court) – Represented 3 diamond traders who were Respondents in an application made by Kent Police for the detention of cash seized from them under s.295(2) of the Proceeds of Crime Act 2002.

R v ST (Court of Appeal) – The defendant pleaded guilty to 7 counts of possession with intent to supply class A drugs. The sentencing judge did not give the correct reduction in sentence for the guilty plea. In allowing the appeal the Court of Appeal reduced the sentence from 36 months custody to 32 months.

R v TP (Maidstone Crown Court) – Defendant was acquitted of Affray following a 6 day trial. The Defendant was also charged with possession of an offensive weapon, and the charge was dismissed following a successful half-time submission of no case to answer. The matter was further complicated by the fact that the initial investigation was commenced in relation to an attempted murder where the defendant was the victim of a stabbing.

R v SS (Ipswich Crown Court) – Successful appeal against conviction where the defendant was convicted of sexual assaulting his former partner in the Magistrates’ Court.

R v SM (St Albans Crown Court) – Defendant was charged with theft from an employer for over £20,000. Sentenced to 12 months custody suspended for 18 months.

R v MM (Harrow Crown Court) – Defendant pleaded guilty to s.20 GBH. He had a lengthy history of previous convictions, which included ABH, GBH, rape and robberies. He was sentenced to 16 months custody.

R v SB (Southend Magistrates’ Court) – The Crown had to offer no evidence on an allegation of serious sexual assault following submissions on adjournments.

R v AH (Romford Magistrates’ Court) – The defendant was a teacher who had been charged with two common assaults in a domestic contest. He was of good character, and a conviction would have resulted in him losing his job. He was acquitted of both charges after trial.

R v MSH (High Wycombe Magistrates’ Court) ­– A taxi driver was acquitted of a common assault following trial. An application for a restraining order on acquittal was also successfully resisted.

MB v RMBC (Rotherham Town Hall) – Represented a Taxi Driver before the Council’s licencing sub-committee, in an application for return of his taxi licence, which had initially been revoked following an allegation of historic child sex offences arising out of the ‘Rotherham Grooming Scandal’.

Luton Borough Council v NUR (Luton Crown Court) – Defendant was a car dealer who was charged with fraudulent trading contrary to s.993 of Companies Act 2006. The value of the fraud was over £70,000.The Defendant pleaded guilty and was sentenced to 12 months imprisonment suspended for 2 years.

Fluent in Urdu and Punjabi.