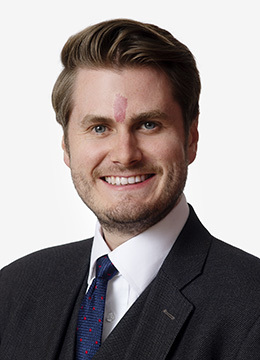 He is known for his excellent oral and written advocacy, attention to detail, and outstanding client care. Clients describe him as ‘really really brilliant’, praise his ‘empathy and affable nature’, and describe him as ‘a true testimony to what a barrister should be’. Robert has particular expertise in representing young people, and people with a range of mental health and other vulnerabilities.

His submissions in the Court of Appeal have been described as “carefully constructed and able” and as having “commendable succinctness and force”.

Before pupillage, Robert worked for two and a half years as a paralegal and police representative in a highly-rated criminal defence team in East London, assisting partners litigating a range of criminal matters from low level assaults to allegations of rape and murder. Robert is also experienced in matters arising from legal aid costs determinations.

Robert has experience litigating civil injunctions under the Antisocial Behaviour Crime and Policing Act 2014, Part 1 (Anti-social behaviour injunctions) at all stages from application to appeal.

Appeal against sentence. Submissions described by Edis J as having ‘commendable succinctness and force’

Robert appeared alone in his second-six months of pupillage in this appeal against sentence, in which the Court agreed that the sentencing judge had wrongfully withheld credit for a guilty plea to failing to surrender to custody. Gross LJ described Robert’s submissions as “carefully constructed and able”. 6-month sentence reduced by 2 months.

Robert persuaded the Court to impose a sentence of 6 months imprisonment for a high value commercial burglary said by the prosecution to have an appropriate starting point of 2 years.

Possession of Class A drugs with intent to supply. Robert persuaded the Court to impose a sentence of 26 months’ imprisonment, well below the starting point for the category advanced by the prosecutor.

Robert is experienced at advising and representing individuals facing prosecution for a range of motoring related offences. Robert is able to accept instructions directly from members of the public, without a solicitor, in appropriate cases.

Individual charged with failing to provide driver information. Robert persuaded the prosecution to offer no evidence on the day of trial, based on a failure to follow the Criminal Procedure Rules regarding service of documents.

Guilty plea to failing to provide a specimen having been suspected of driving. Robert persuaded the Court to impose a fine, rather than a community order as indicated by the sentencing guidelines.

Guilty plea to driving whilst disqualified a very short while after disqualification imposed. Robert persuaded the bench to impose a community order, rather than imprisonment as indicated by the sentencing guidelines.

Summary trial for being drunk in charge of a motor vehicle following alleged police pursuit. Acquitted.

Robert is authorised to appear for the NMC and receives regular instructions to appear for the council before the NMC committees. Rob is experienced at dealing with matters involving allegations of lack of competence, abuse of patients, and impairment through drink or drugs, as well as cases involving sensitive issues concerning the practitioner’s health.

Robert is currently instructed in an ongoing matter before the HCPC, representing a paramedic accused of serious failings; he appeared in a 5-day substantive hearing in this matter, and is instructed for a further 4 days later this year. During this matter, described by presenting counsel as the most evidentially complex matter she had ever dealt with, Rob dealt with complex issues involving disclosure of unused material.

Robert Levack is approved to accept instructions direct from international and UK clients on a direct access basis, without the need for a solicitor intermediary in appropriate cases.