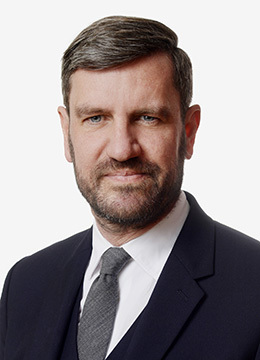 He has been praised by a Crown Court judge for the ‘robust and effective’ manner in which he cross-examines witnesses. A solicitor described Tom as ‘an excellent advocate and a delight to instruct’.

Tom was recently led by Neil FitzGibbon in a multi-million-pound Class A drugs conspiracy, described as one of Cleveland police’s most complex ever investigations.

He was then led again by Mr FitzGibbon in a modern slavery case involving allegations of servitude, trafficking within the UK and around Europe, and forced or compulsory labour.  After three months of prosecution evidence, their client was acquitted of all charges following a submission of no case to answer.

Tom also prosecutes and is on the CPS Advocate Panel for General Crime at Level 2.

He has a particular interest in criminal appeals, having appeared in appeals at both the Court of Appeal Criminal Division and at the Divisional Court.

He was called to the Bar in 2017 following a successful career as a journalist.

R v A – 2022 (Croydon Crown Court) – A jury found A not guilty of a knifepoint robbery, a s.20 wounding with intent (by stabbing) and possession of a bladed article. Tom’s client had been identified by fingerprints left on a document handled by the robber at the scene. His defence was that he had been wrongly identified and he was unanimously acquitted by the jury.

R v A – 2022 (Stafford Crown Court) – Operation Scarf. Led junior in a complex multi-handed modern slavery case in which the client was acquitted of all charges following a submission of no case to answer.

R v R – 2021 (Chelmsford Crown Court) – R was found not guilty by a jury following a multi-handed trial for possession with intent to supply Class A drugs.

R v SM  [2021] EWCA Crim 1917 (Court of Appeal Criminal Division) – S’s sentence for serious sexual offences was reduced on appeal from 26 years (18 years plus 8 years extended licence) to 20 years (14 years plus 6 years extended licence). Tom was instructed after the barrister who had represented S at sentence advised there were no grounds to appeal the 26-year sentence.

R v V – 2021 (Inner London Crown Court) – V was found not guilty by a jury of assaulting an emergency worker (an off-duty police inspector) and the officer’s mother.

R v H – 2021 (Snaresbrook Crown Court) – H was charged with s.18 GBH following an acid attack which caused burns to the face, arms and back. The Crown accepted a plea to violent disorder.

R v J – 2021 (Court of Appeal Criminal Division) – J was disqualified from driving for 9 years 6 months having pleaded guilty to dangerous driving at the Central Criminal Court. The period of disqualification was reduced to 4 years 6 months on appeal.

R v J – 2020 (Cambridge Crown Court) – A s.18 wounding with intent to cause GBH in which a serving prisoner was slashed in the face with a razor blade leaving a 10cm scar.

R v S – 2020 (Kingston-Upon-Thames Crown Court) – A conspiracy to rob £37,000-worth of jewellery and watches in a professionally planned commercial robbery.

R v P – 2020 (Peterborough Crown Court) – P, a serving prisoner, was charged with s.20 wounding on a prison officer after allegedly slashing the officer’s hand with a homemade knife. He was found not guilty by a jury after a trial.

R v B – 2020 (Harrow Crown Court) – B was accused of violent attacks on two schoolboys. The case was resolved through a trial of the issue after B, who has a diagnosis of paranoid schizophrenia, was found unfit to plead.

R v D – 2019 (Southwark Crown Court) – D was found not guilty by a jury of assaulting an emergency worker (a police officer) who arrested him during a protest outside the Houses of Parliament at Westminster.

R v A – 2019 (St Albans Crown Court) – A was found not guilty by a jury following a trial for assaulting an emergency worker (a police officer) and criminal damage.

R v L – 2019 (Lewes Crown Court) – A jury found L not guilty of possession with intent to supply Class A and Class B drugs after a trial.

Tom successfully resisted an appeal by way of case stated at the High Court. He was instructed by the CPS Appeals and Review Unit to respond to an appeal from the Crown Court. The issue was whether the Crown Court had been wrong to find an offence was racially aggravated within the meaning of section 28 of the Crime and Disorder Act 1998.

Honourable Society of the Inner Temple

Runner up in the Times/Kingsley Napley Student Advocacy Competition 2016

Tom Worden is approved to accept instructions direct from international and UK clients on a direct access basis, without the need for a solicitor intermediary in appropriate cases.