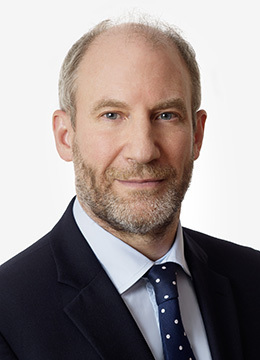 Richard Christie was appointed to the Attorney General’s A list of prosecution counsel in 2002 after many years specialising in heavy defence work. His practice continues to reflect a mix of both defence and prosecution work in almost equal measure. He deals in all areas of criminal work but especially serious fraud, murder and cases that require substantial client care. He successfully concluded the hugely complicated defence of the historic axe murder of Private Eye Daniel Morgan, a case which involved numerous allegations of police corruption and is linked to the News International phone hacking scandal and the murder of Stephen Lawrence (see observations of Maddison J in the case section below). The case has been subject to an 8 year long Independent Panel Inquiry which finally reported in 2021 – concluding that there was institutional corruption in the Metropolitan police. Please see the full report – https://www.danielmorganpanel.independent.gov.uk/wp-content/uploads/2021/06/CCS0220047602-001_Daniel_Morgan_Inquiry_Web_Accessible.pdf

He also appeared before the Leveson Inquiry.  His successful prosecution of a multi-million pound 10 handed excise fraud was featured on the ITV programme “Fiddles, Cheats and Scams” and he is the only counsel successfully to have defended a murder case brought by DCI Colin Sutton – The subject of Sky Crime’s “The Real Manhunter”.

He has also been on the SFO panel of approved counsel for both prosecution and proceeds of crime work since 2009 being re-appointed in 2013 and 2017 respectively.

He is one of only a few designated counsel, appointed to deal with rough justice/historic appeal cases by Her Majesty’s Revenue and Customs. He is also engaged in a number of these cases at any one time on behalf of the defence. He regularly acts on behalf of the Criminal Cases Review Commission in judicial review proceedings in relation to these cases.

Before coming to the Bar, he trained with the leading accountancy firm Touche Ross and Co. (now Deloitte).

Richard Christie KC has been ranked as: 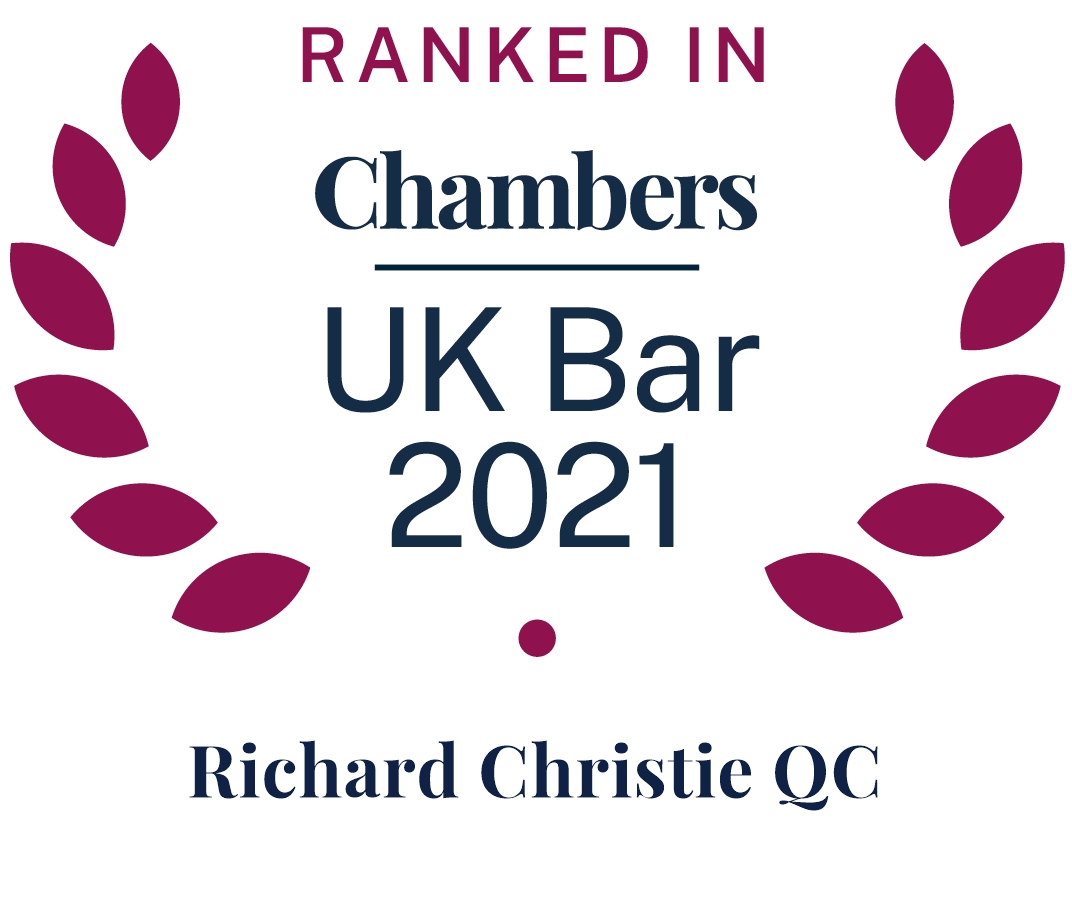 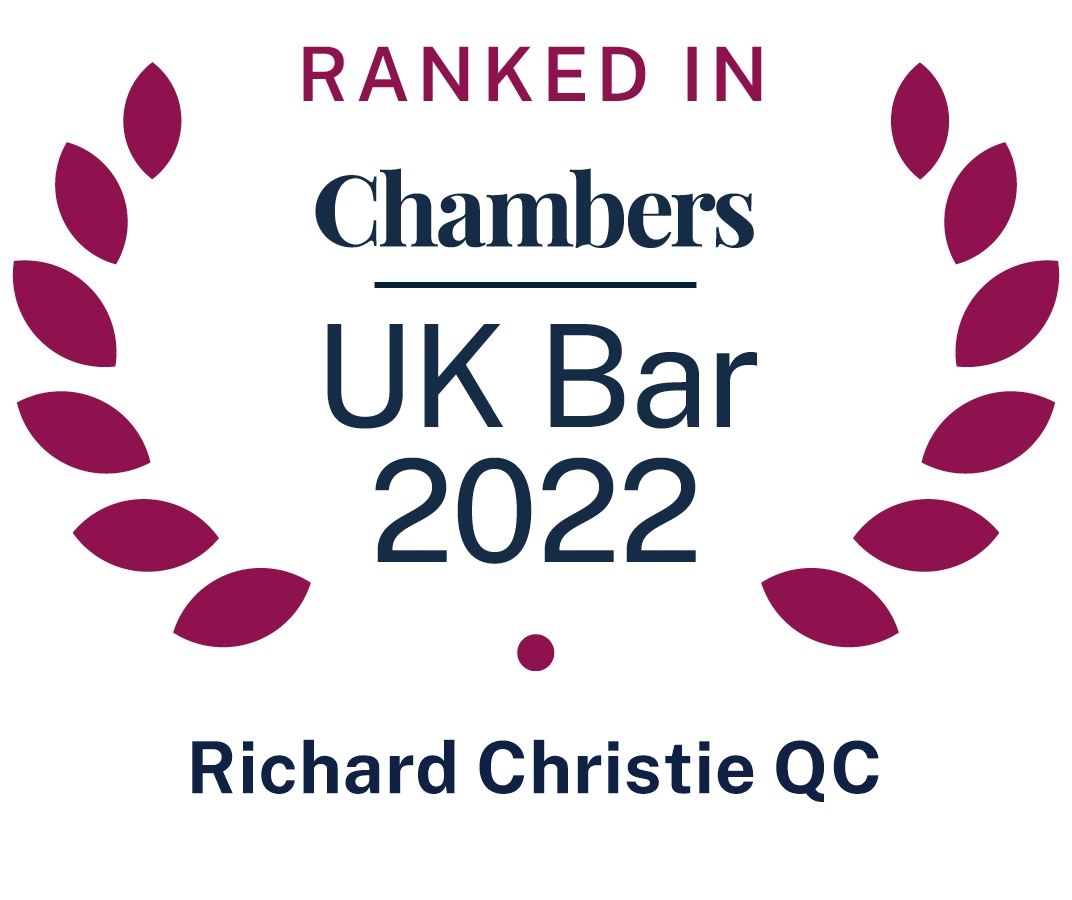 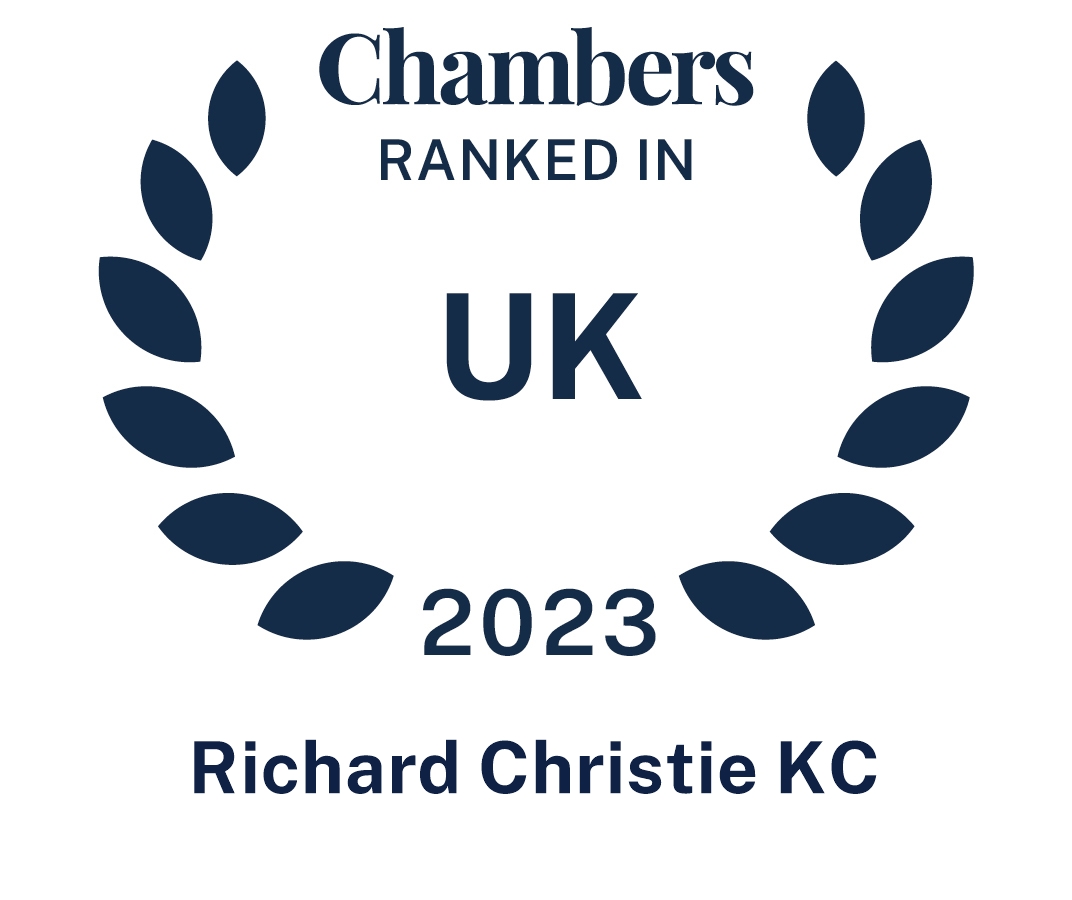 R v Karim (2015-2020) – 1.2 million-page immigration and revenue fraud. Listed for trial twice but adjourned in 2016 and then 2017. 8-month trial listed in 2018. Creation of employment by legitimate immigration firms to advance claims for leave to remain in UK and subsequent tax reclaims from the HMRC. This was a vast all-embracing case involving a senior political figure in Bangladesh, a qualified lawyer there who was also training to become a member of the Bar. 2nd charge which resulted in a very complex LPP process. Ongoing confiscation.

R v Piggott and others (2005-2010) – £44 million MTIC fraud involving use of off-shore companies in Hong Kong, Spain, Panama, Portugal, Ireland and France 15-week trial. Confiscation joined with ancillary relief proceedings in the High Court (Leading counsel 2006-2010). Complicated issues relating to divorce and ownership of property held in the names of others unrelated to the defendant.

R v Stapleton, May and others (2002) – One of the first major Missing Trader Intra Community (MTIC) VAT ‘carousel’ frauds involving ten Defendants and the loss of over £12 million to the revenue plus confiscation. A case now synonymous with all confiscation proceedings.

R v Garrod (2018) – Manslaughter in the course of armed robbery with firearms. Acquitted of robbery and firearm offences. D subject to a previous life sentence. Jury unable to agree on manslaughter charge. Against Christine Agnew QC.

R v McCarthy (2017) – Murder within the travelling community. Alleged revenge attack by running over the victim with a transit van following attack with slash-hooks and machetes by the victim and his family. Acquitted of murder. Against Miranda Moore QC. https://www.bbc.co.uk/news/uk-england-beds-bucks-herts-38959521

R v Iftinca (2015) – Leading Counsel with Matthew Bagnall. Instructed to defend in 6 handed murder trial at Chelmsford Crown Court. The trial was due to last 8 weeks but Mr Iftinca was acquitted at the close of the Prosecution case. Against Jeremy Benson QC

R v Naweed Bashardost (2015) – Acquittal on charges of murder and conspiracy to cause grievous bodily harm following 4 month trial. 3 applications to discharge the jury, two because of alleged bias. Naweed Bashardost was acquitted of murder and conspiracy to commit GBH. The seven handed case was heard in Birmingham Crown Court and gave rise to numerous problems as a result of reports of jury bias against the defendants. The case concerned an alleged gang attack by Afghans on a rival Pakistani gang who were all said to be armed with Samurai swords, baseball bats and at least one shotgun. Naweed Bashardost was one of only 3 defendants who were acquitted completely of all charges. https://www.bbc.co.uk/news/uk-england-birmingham-30716002

“My firm view is that the legal representatives for all the defendants, faced with a mammoth task, have responded magnificently to it. And the quality of the written and oral submissions that I have received has been of the highest quality. The industry and the tenacity which has been shown by the defence teams is to be commended and the defendants will leave court knowing, if they did not already and I think they must have known before, that they have been very well served.”

“Mr. Christie, if I may say so, it is obvious from the detail and quality of your submissions that you have been investing a huge amount of effort into this.”

The case has been linked to the phone hacking scandal, has featured on Panorama and been widely reported in all the National Newspapers.

R v Carter (2006) – Leading Counsel in murder trial. Complicated forensic evidence in which he successfully argued that there had been no killing at all (4 week trial). Against Sally Bennett-Jenkins QC and then Jeremy Benson QC

In the course of the Court’s judgment at paragraph 36 Holroyde LJ observed:

“We preface our remarks by paying tribute to the care and clarity with which both counsel have addressed us. We are extremely grateful for their written and oral submissions” https://crimeline.co.uk/wp-content/uploads/2017/11/taft.pdf

R v Durham (2012) – Leading Counsel. 11 counts of conspiracy to rob CIT vans over a 5 year period. 6 of 11 acquitted. Large scale ‘fit-up’ alleged against the Flying Squad who had previously fitted up two of the defendants. 5 month trial. Against Brian O’Neill QC.

R v Louro and Aisthorpe (2019) – historic murder of vulnerable elderly man and cover-up staged to make death look like suicide meaning that it took 9 years and a fresh investigation to uncover the truth. Perjured evidence at inquest. https://www.bbc.co.uk/news/uk-england-norfolk-48643776

R v White and Shepherd (2018/2019)
Convictions secured against two drug dealers who murdered their friend and rival having lured him to dense woodland, beaten him over the head with baseball bats and cut his throat. A 7-week trial at Cambridge Crown Court after jury being in retirement for 6 full days. Both defendants were sentenced to life imprisonment and were required to serve minimum terms of 29 and 28.5 years respectively. The case involved detailed scientific, telephone, CCTV evidence and eye witness testimony following the creation of false alibis by both defendants. Against Alastair Malcolm QC and Richard Barraclough QC. Case featured on Channel 4’s 24 hours in Police Custody.

R v R (2020) – Member of the Bar charged with alleged serious fraud on public funds arising from his practice – ongoing.

R v Karim (2015-2020) – 1.2 million page immigration and revenue fraud. Listed for trial twice but adjourned in 2016 and then 2017. 8 month trial listed in 2018. Creation of employment by legitimate immigration firms to advance claims for leave to remain in UK and subsequent tax reclaims from the HMRC. This was a vast all-embracing case representing a senior political figure in Bangladesh, a qualified lawyer there who was also training to become a member of the Bar. 2nd charge which resulted in a very complex LPP process. Ongoing confiscation.
https://www.cps.gov.uk/cps/news/four-sentenced-their-part-uks-largest-ever-visa-fraud

In silk, Richard Christie has been involved in many quasi-criminal proceedings including judicial review proceedings on behalf of the CCRC. He was engaged as independent counsel to the IPCC in the shooting of barrister Mark Saunders. He has also drawn extensively on his experience as a Deputy Taxing Master, dealing with many high-profile high value costs cases on behalf of HMRC and other public bodies.

He has regularly dealt with civil actions against the Police and appeared in the landmark House of Lords case of Martin v Watson (1994) Q.B. 425 C.A. and (1995) A.C. 74. In recent years, as acts of policing have been carried out more and more by public companies, this has meant an increase in work in this area.

Richard Christie KC is approved to accept instructions direct from international and UK clients on a direct access basis, without the need for a solicitor intermediary in appropriate cases.