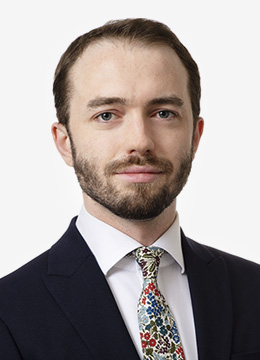 Matt joins the criminal Bar having spent a number of years in pastoral/support roles in primary and secondary education. He has also worked as a paralegal at a leading firm of criminal defence solicitors. He has therefore gained extensive experience working closely with vulnerable and young people.

During his first six he was supervised by Terence Woods, who he assisted primarily with the prosecution of serious sexual offences. He also provided assistance to Terence and other members of Chambers undertaking heavyweight defence work, involving allegations of s.18 GBH and large-scale drug dealing.

He now accepts instructions in the Magistrates’ Court and Crown Court, both prosecuting and defending. He is also open to diversifying his work by exploring Chambers’ other practice areas. He recently assisted HHJ Simon Mayo QC, formerly of these Chambers, in researching recent developments in the criminal law of England and Wales for the 2023 edition of the Crown Court Index.

Matt is currently instructed by HMRC as independent counsel on a document review exercise. He is advising on potentially privileged material seized from suspects as part of a major criminal investigation.

Vulnerable 21 year-old man residing at a YMCA and already the subject of a suspended sentence order acquitted of causing criminal damage and assaulting his former partner. Careful cross-examination of the complainant and her new partner exposed fatal inconsistencies in the prosecution case.

Matt’s client was acquitted after trial of assaulting an emergency worker (police constable). Officers attended the address of the defendant’s mother to arrest the defendant, following an allegation made that he had assaulted her. It was claimed that as he was then being arrested outside the address the defendant had deliberately bent an officer’s wrist back and trapped his ankle.

Man of good character acquitted of assault emergency worker (police constable) outside Stamford Bridge despite non-attendance of key defence witness and the eyewitness testimony of a Chief Inspector.

19-year-old acquitted of assault emergency worker (police officer) upon a successful submission of no case to answer, despite having been convicted of the same offence only months earlier.

Matt secured a conditional discharge for a young man with serious mental health issues who pleaded to possession of cannabis.

Secured bail for 21-year-old client who pleaded to two charges of being concerned in the supply of class A drugs as part of a wider ‘County Lines’ network.

Prosecuted a ‘superfan’ stalker of well-known pop singer Jamiroquai for a serious breach of a restraining order previously imposed. The convicted defendant was sentenced to 10 months’ imprisonment.

Successfully opposed the appeal of an individual convicted of failing to provide driver details.