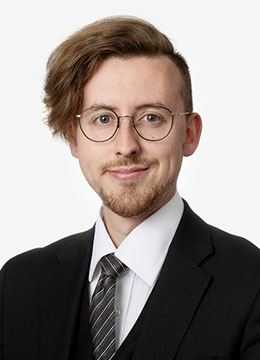 Sebastian was called to the Bar in 2016 and joined Chambers in April 2020 after successful completion of his pupillage. Since April 2019 he has regularly appeared in the Crown Court, Magistrates’ Court and Youth Court for both the prosecution and defence.

Sebastian has been praised for his attention to detail, commitment and approachability with clients. He is skilled in specialist youth advocacy, regularly representing young people and vulnerable adults, including those suffering with mental health difficulties, schizophrenia and autism spectrum disorder. Sebastian always seeks to reassure and fearlessly defend clients of all ages and walks of life, including those who may have never stepped foot in the often-intimidating criminal courts before.

Primarily a specialist criminal practitioner, Sebastian has successfully defended clients at trial for anything from driving offences to possession of bladed articles, serious assaults and domestic violence. He has also been instructed to prosecute a wide range of offences, including burglary and sexual offences.

Before commencing pupillage in Chambers, Sebastian worked as a paralegal in a successful property law team, defending specialist prosecutions brought by local authorities against landlords and companies. This included defending Trading Standards & HMO prosecutions, as well as in social tenancy fraud cases.

In addition to general criminal law expertise, Sebastian has a rapidly-diversifying practice experience in dealing with crime-adjacent and more niche areas:

R v JA (Bromley Magistrates’ Court) – JA was arrested in his car by specialist officers with a quantity of cannabis and a knife hidden down the side of the driver’s seat. JA was acquitted of possessing the bladed article after trial on the basis that he had a good reason and received a conditional discharge for possession of the cannabis.

R v T (Bromley Youth Court) – T was a vulnerable autistic 15-year old who was charged with several assaults whilst subject to a section under the MHA. After successful representations on behalf of the client, the CPS made the decision to withdraw the case altogether on the day of trial on the basis that it was not in the public interest to prosecute.

R v SC (Harrow Crown Court) – Successful appeal against sentence in a case of driving without due care and attention, in which SC had been disqualified after ‘totting up’ of points. After renewed plea of exceptional hardship, the Judge agreed to sentence outside of the guidelines and impose a short discretionary disqualification of 14 days in lieu of penalty points.

Sebastian deals with CPS Sessions list in the magistrate court

Sebastian sits on the Young Bar Sub-Committee of the CBA