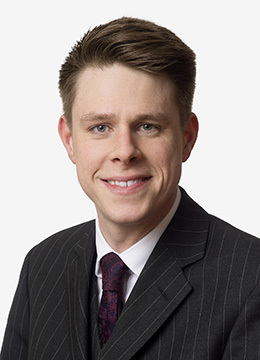 Liam accepts instructions in all areas of criminal law and defended in a broad range of offences including serious violent offences (s.18, s.20 and ABH), theft (over 100k), fraud, robbery, public order and drug supply offences.

Liam is a dedicated and tenacious advocate who consistently fights to get the best result for those he represents. He is regularly instructed to represent vulnerable clients with complex mental health and substances abuse issues, using his compassion and sensitivity to put such clients at ease.

R v Tsekiri [2017] EWCA Crim 40- Junior alone in appeal against conviction. This appeal clarified the law on submissions of no case to answer where the sole evidence in the case is DNA deposited on a moveable object.

R v Vaughan [2018] EWCA Crim- Junior alone in appeal against sentence. This appeal concerned section 51A of the Firearms Act 1968. Fresh evidence adduced from firearms expert David Dyson which demonstrated the firearm in question was not subject to the minimum 5-year sentence. Sentence for possession of an imitation firearm with intent to endanger life reduced from 6 years to 4 years imprisonment.

R v NH [2021]- Isleworth Crown Court- Secured a suspended sentence for a Defendant who pleaded guilty to robbery. Successfully argued at a Newton Hearing that the Defendant did not threaten the victim with a weapon.

R v M [2021]- Canterbury Crown Court- Secured a suspended sentence for a Defendant found with £50,000 worth of criminal property.

R v H [2021]- Lewes Crown Court- Junior alone in case involving a knife-point robbery on a train. Successfully reduced the starting point from 4-years to 2-years imprisonment after a Newton Hearing and persuaded the Court to suspend the sentence for a young Defendant with autism and learning/behaviour needs.

R v SS [2019]- Leicester Crown Court- Led by Jason Bartfeld QC in a murder trial in which the Defendant was alleged to have stabbed the Complainant in the chest with a knife during a workplace dispute. The trial involved legal arguments relating to the partial defence of loss of control.

R v D [2019]- Blackfriars Crown Court- Junior alone in case alleging allegation of assault occasioning actual bodily harm. The Defendant was alleged to have broken a bottle of the head of the head of the Complainant in the middle of the Elephant and Castle Bingo Hall. The jury unanimously acquitted the Defendant.

R v C [2019]- Led by Greg Unwin in a multi-handed case concerning an allegation of conspiracy to transfer criminal property. Case involved a four-year pre-charge investigation and over 80,000 pages of served evidence. Defendant acquitted after a six-week trial.

R v O [2019]- Led by Andrew Fitch-Holland in a complex child neglect case involving 13 children and 31 separate allegations of neglecting a child. Case involved the late service of 10,000 pages of social service records during the trial. Defendant was acquitted of 8 of the 13 offences alleged against him. Appeal pending.

R v C [2019]- Defending a man accused of public order offences within a church on Remembrance Sunday. Client was conditionally discharged by the Court after mitigation had been advanced relating to the Defendant’s severe form of tinnitus.

R v D [2018]- Woolwich Crown Court- Junior alone in a case alleging possession with intent to supply class a drug. A large amount of class-a drugs were found in the defendant’s coat pocket. Case resulted in a hung jury.

R v J [2017]- Woolwich Crown Court- Junior alone in multi-handed case involving allegation of conspiracy to transfer criminal property. Defendant received a suspended sentence after pleading guilty on a basis which was fundamentally different to that alleged by the prosecution.

R v R [2017]- Inner London Crown Court- obtained a suspended sentence for a case of class a street dealing in a significant role after a fully contested Newton Hearing.

R v W [2017]- Blackfriars Crown Court- Junior alone defending in a case of theft where the defence was mistaken identity. The case involved complex gait-analysis evidence. Not guilty verdicts on all counts.

R v A [2016]- Woolwich Crown Court- Junior alone in multi-handed burglary of a commercial premises. Successful submission of no case to answer made based on weak identification evidence.

R v D [2016]- Croydon Crown Court- Junior alone in case involving an allegation of having a bladed article- Not guilty verdict after a reasonable excuse was successfully advanced.

R v W [2016]- Woolwich Crown Court- Junior alone in case involving multiple allegations of breaching a Non-Molestation Order. One allegation was dismissed after a successful submission of no case to answer. The jury unanimously acquitted the defendant in relation to all other counts.

R v A [2017]- Inner London Crown Court- Junior alone in a case involving allegations of theft from a high-profile Chinese television presenter of over £100,000.

R v N [2017]- Southwark Crown Court- Junior alone in a case involving multiple allegations of breaching a restraining order. The prosecution was forced to offer no evidence on the first day of trial after a successful application to exclude the defendant’s interview under s.78 of PACE.

R v RS [2016]- Possession with Intent to Supply Class A Drugs at Wood Green Crown Court- YRO with ISS given to youth with a previous conviction for drugs supply.

R v N [2016]- Possession with Intent to Supply Class A Drugs at Derby Crown Court. Starting point of 4 years and 6 months mitigated down to one of 1 year and 8 months.

R v F [2016]- Dangerous Driving- 24-month suspended sentence given in a case where the defendant had been chased by police for two miles at 120mph on the wrong side of a dual carriage way.

R v M [2021]- St Albans Crown Court- Prosecuted an allegation of arson with intent to endanger life and possession of an imitation firearm whilst committing a specified offence. Court ordered an extended sentence of 9-years imprisonment.