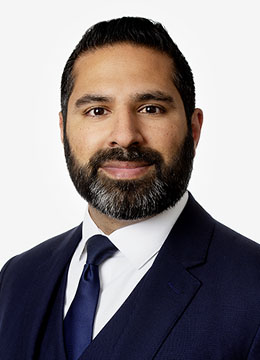 Ali was called to the Bar in 2010 and accepts instructions to prosecute and defend in all types of criminal cases.

Ali’s practice covers the full spectrum of criminal offences and related proceedings, as well as aspects of confiscation, financial regulation, and local government law. He practices mainly in the Crown Court but also has experience in the Court of Appeal, County Court, and Magistrates’ Court.

R v JJ (Swansea Crown Court) – Ali’s client was the lead defendant in a multi-handed case arising out of the collapse of a motor home dealership. Despite starting out facing 22 counts of theft and fraud, and undergoing multiple trials and legal arguments over several years, in the end Ali’s client was cleared of all charges. At trial, Ali raised arguments based on contract law and equity and trusts that resulted in several counts being withdrawn from the jury and the trial itself being halted. The prosecution eventually offered no evidence on the remaining charges.

R v WC (Cardiff Crown Court) – Ali’s client was charged with being a key player in a multi-handed ‘rogue-trader’ Fraud. The case turned on telephone and cell-site evidence. Ali successfully argued that there was insufficient evidence and all counts were withdrawn from the jury by the judge.

R v DC (Court of Appeal, Criminal Division) – Ali’s client had been made the subject of a Confiscation Order. When the client was involved in a traffic accident and received about £20,000 in compensation for his injuries, a Crown Court judge ordered that he pay that money to the prosecution. Ali took his client’s case to the Court of Appeal and the court reversed the order in part – Ali’s client was allowed to keep half the money.

(A copy of this judgement is available from Ali for other lawyers upon request.)

R v DW (Worcester Crown Court) – Ali’s client pleaded guilty to conspiracy to steal as part of a multi-handed confidence Fraud. The prosecution sought a starting point for sentence of 5 years but following more than an hour of oral arguments about sentence Ali’s client received a suspended sentence.

R v GH (Chester Crown Court) – Ali successfully applied to dismiss a charge that his client had breached an Anti-Social Behaviour Order related to cold-calling and rogue-trading. For a related breach his client received a suspended sentence. The order had been made as result of earlier proceedings in which Ali did not appear but which are reported here:

R v MM (Newport Crown Court) – Ali’s client was a man of good character charged with Perverting the Course of Justice by blackmailing an employee to drop some charges arising out of a fight at a staff Christmas Party. His client was unanimously acquitted by the jury after less than one hour of deliberations.

R v LD (Luton Crown Court) – Ali’s client was unanimously acquitted by the jury after trial of Assault Occasioning Actual Bodily Harm, Assault by Beating, Criminal Damage, and Burglary in a revenge attack as part of a ‘family feud’.

R v X (Cardiff Crown Court) – Ali’s client was charged as a peripheral party to a multi-handed Fraud case arising out of alleged confidence frauds totalling more than £300,000. As a result of careful negotiations Ali’s client (whose identity is protected) pleaded guilty to a single offence and was sentenced to a suspended term of imprisonment. The co-defendants received prison sentences.

R v TP (Cardiff Crown Court) – Ali’s client was identified by a witness as being part of a multi-handed fraud against a Local Authority concerning, inter alia, £100,000-plus compensation claims for lost horses. Following repeated representations and legal arguments by Ali over many months, the case against Ali’s client was abandoned by the prosecution at the start of the trial.

R v HN (Chelmsford Crown Court) – Ali’s client was unanimously acquitted by the jury after trial of Assault Occasioning Actual Bodily Harm against a child. The case required expert cross examination of a vulnerable witness and Ali’s handling of the witness was approved of by the judge.

R v GG (Snaresbrook Crown Court) – Ali’s client was unanimously acquitted by the jury after trial of Sexual Assault on a friend during a night of drinking.

R v JL (St Albans Crown Court) – Ali’s client was an alcohol-dependent woman unanimously acquitted by the jury after trial of Threatening to Commit Arson against her estranged husband. The jury were told that she had a previous conviction for Arson in similar circumstances.

R v NQ (Croydon Crown Court): – Ali’s client was charged with Burglary at a beauty salon. The jury acquitted her of burglary and she was sentenced to a fine for theft instead.

R v OBA (Isleworth Crown Court): –Ali’s client fled to Libya on the eve of his trial to participate in the Civil War in that country. Ali successfully stopped the prosecution from proceeding in his absence despite his voluntary absence and breach of bail conditions.

R v JJ (Barking Juvenile Court) – Ali’s client was a 14-year-old youth charged with Assault Occasioning Actual Bodily Harm and Affray as part of a group attack with a cricket bat. Ali successfully opposed applications by the Crown to rely on hearsay evidence, with the result that the prosecution concluded there was insufficient evidence to proceed.

R v DF (Camberwell Green Magistrates’ Court) – Case involving highly vulnerable complainant and use of an intermediary for cross examination. Ali’s client was acquitted of Witness Intimidation because of a successful legal argument by Ali that there was no case to answer, and she received a suspended sentence for the rest of the charges. Ali’s handling of the vulnerable witness was complimented by the judge, and his legal submissions were described as ‘concise and accurate’.

R v AL (Thames Youth Court) – Ali’s client was picked out of a police line-up as having been involved in a street robbery. He was found not guilty by a judge on the basis that the evidence of identification was nevertheless insufficient.

In cases where Ali’s clients have decided to plead guilty he has often been successful in securing suspended sentences for them.

R v GKB (Ipswich Crown Court) – Ali secured conviction after trial of a defendant charged with possessing articles for use in online computer fraud including ‘phishing’, ‘carding’ and the trade in stolen personal information.

R v BB (Guildford Crown Court) – Ali secured conviction after trial and a sentence of 21 months’ imprisonment of a defendant charged with threatening with a bladed article, affray and criminal damage as a result of an incident involving the wielding of an axe in a public house.

R v DL (St Albans Crown Court) – Ali secured conviction and sentence of four and a half years imprisonment for a defendant charged with two burglaries and dangerous driving in a case that turned on a web of circumstantial evidence, including call logs, text messages, instant messaging, cell site, ANPR, till receipts, CCTV, fingerprints and DNA. The judge commented in summing up the case that the phone evidence had been ‘carefully filleted’ for the jury by Ali in cross-examination.

R v SA (Central Criminal Court, ‘the Old Bailey’) –Despite being asked to fill in on the day of trial for a colleague taken ill at court, Ali secured a conviction in a case concerning a defendant charged with participating in organised group robbery targeting men exiting a London gay nightclub. The defendant was sentenced to five and half years’ immediate imprisonment and made subject to a Criminal Behaviour Order banning him from Soho.

R v AB and others (Chelmsford Crown Court) – Ali was instructed to prosecute a multi-handed case of dishonesty offences arising out of the organised group burglary of an outdoor goods store. Ali noticed a defect in the Indictment and altered it to remove the risk of a highly technical acquittal, leading to the main 2 defendants immediately changing their pleas to guilty.

R v BT (Inner London Crown Court) – A mentally disordered young man led police on a high-speed car chase that required him to be rescued by helicopter from marshland in South East London. Ali was successful in proving to the jury that he did the act in question leading to a suitable order being made by the court to improve his mental health.

In addition to prosecution on behalf of the Crown, Ali has been instructed on behalf of the Department for Work and Pensions, Local Authorities and Trading Standards. He has experience of regulatory prosecution under the Consumer Protection from Unfair Trading Regulations in the Crown Court, enforcement proceedings in relation to Community Protection Notices in the Magistrates’ Court, and committals to prison in cases concerning civil injunctions in the County Court.

Ali has also been instructed in a pro bono capacity by the Stop Ivory campaign to advise the Malawian DPP in relation to an appeal against an inappropriate sentence in a prosecution in that jurisdiction involving 2.6 tonnes of ivory, which ultimately resulted in a landmark ruling in the Supreme Court of Malawi and an increase in sentence from fines of $5,500 to 8 years’ imprisonment in each case.

Ali has been appointed as an investigator under s.168 FSMA 2000 to assist the Financial Conduct Authority in regulatory enforcement investigations. His experience includes drafting Warning Notices, conducting legal research, document and disclosure review, and taking part in conferences, presentations and negotiations on behalf of the Authority.